Two Days At EduTECH 2014: Where Education And Technology Get Weird Together

By James Croft
In Features
on July 1, 20149 min read
ShareTweetShareSubmit

I walked into EduTECH 2014 at the Brisbane Convention Centre on Tuesday morning, lukewarm coffee in hand, and sidled up to the ticket registration bar. A flustered organiser was tapping away on a PC with a worried look on his face. He was making a clicking noise with his mouse. You know the one.

That rhythmic, slow, repetitive *click* that people make when they expected a thing to work and it hasn’t? Click. Click. Cliiiiiiick. He looked up at me with despairing eyes. “Ah… sorry mate, this ticket machine isn’t working, you’ll have to head over to that desk instead.”

Undeterred, I sidestepped over to another willing volunteer, who took my name and printed a press badge for me. She glanced at it, a little confused and said, “Oh, looks like it only printed half your badge. That’s weird. Oh well, here you go!”

I thanked her, looped the lanyard and half-badge over my head and wandered into the brightly-lit exhibition hall, toward the this-is-big sound, that thrum and pulse of a few thousand people all having conversations at once.

I stepped inside, took the below photo, and then joined the conference wifi to tweet it. It joined without a fuss, but then politely refused to connect to the actual internet for the next 2 days.

I used 4G instead.

A couple of tech-related snafus were an apt introduction to EduTECH; a gathering where technology collides with education. Where Adam Spencer introduces a bunch of international-calibre, education rock-stars like Sugata Mitra, Sir Ken Robinson and Ewan McIntosh on a grand TED-esque stage. 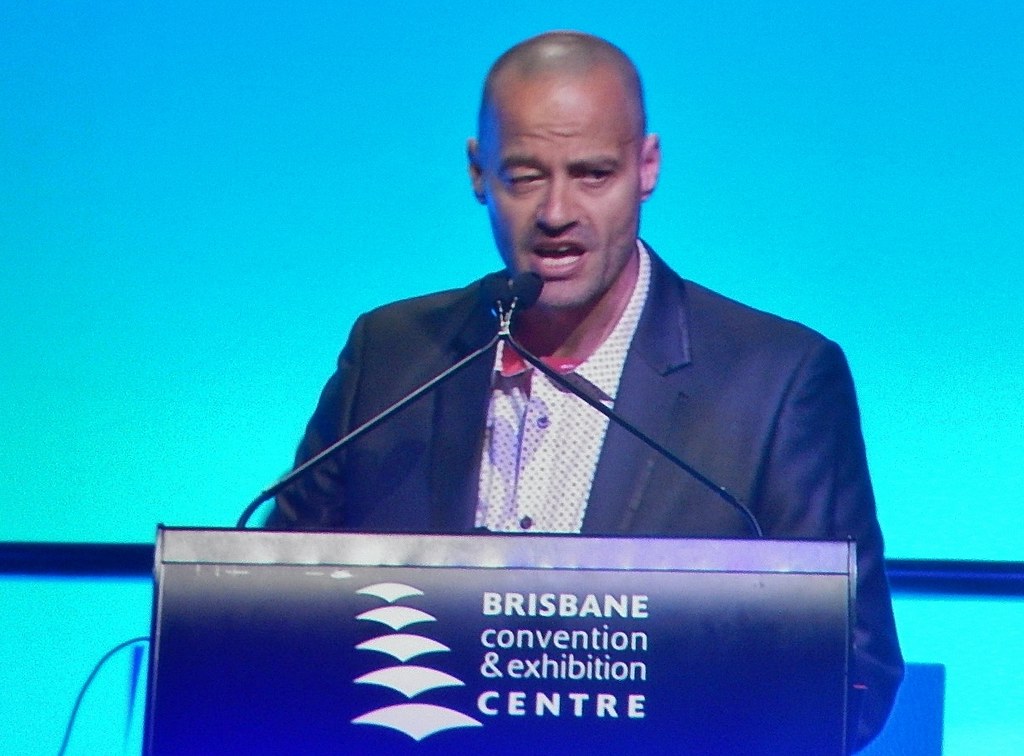 Where teachers share war stories about the changing world of teaching and learning in breakout rooms, on the crowded exhibition floor, or hovering over a paper plate of potato salad from the catering.

It’s also a place where eager polo-shirted technology vendors from across the world will show you their new products and how they can revolutionise your classroom, or university, your training centre. Where you can talk to hundreds of exhibitors about what hardware, software and services you need for the years to come.

And—much like any classroom I’ve ever been in—technology screws up too. Check-in counters don’t always work, the wifi sucks, projectors break, display units lock up or won’t load. It’s familiar, and entirely appropriate really, because this stuff happens constantly in education too. It’s one of the lessons you learn as a teacher, and it was also very much present here as a participant.

So, what did I get out of it? Well, after 2 days of talking to teachers, IT management staff, institute directors, vendor booth representatives, education startup entrepreneurs and more, I came away with a picture of technology in education that is somewhat in the midst of an personality crisis.

So a bit of background on me: I’m an ed-tech developer, and I’ve been going to ed-tech related conferences off and on since I started my career in education back in 2006. That was 9 years ago.

The technology being discussed may have changed, but the message really hasn’t. Teachers need to keep up with technology. Technology can change the classroom. Technology is a catalyst for cultural change. Kids are smarter than us about technology; the term digital natives is an oft-cited (and at this point, sometimes ridiculed) term.

I’ve heard these same messages over and over about tech, from a virtual cornucopia of different speakers, in a variety of different ways. I’ve also done a few talks on the subject myself.

Will the message ever really get through? Even more troubling; are we stating the obvious? Tech is changing the world? Uh doi.

I still don’t know. But we’ll damn sure give it a shot.

A Meeting Of Two Minds

The conference itself was separated into two halves. There was the main congress, where you could see the keynote speakers do their thing. These talks, generally 30-40 minutes in length, are always a good way to tap into the current education zeitgeist.

“Human Resources are much like natural resources. They’re just sitting there, buried, waiting to show themselves.”

Where’s it heading? What are people talking about, or issues that are on the forefront? More importantly; who some smart people you can follow on Twitter? 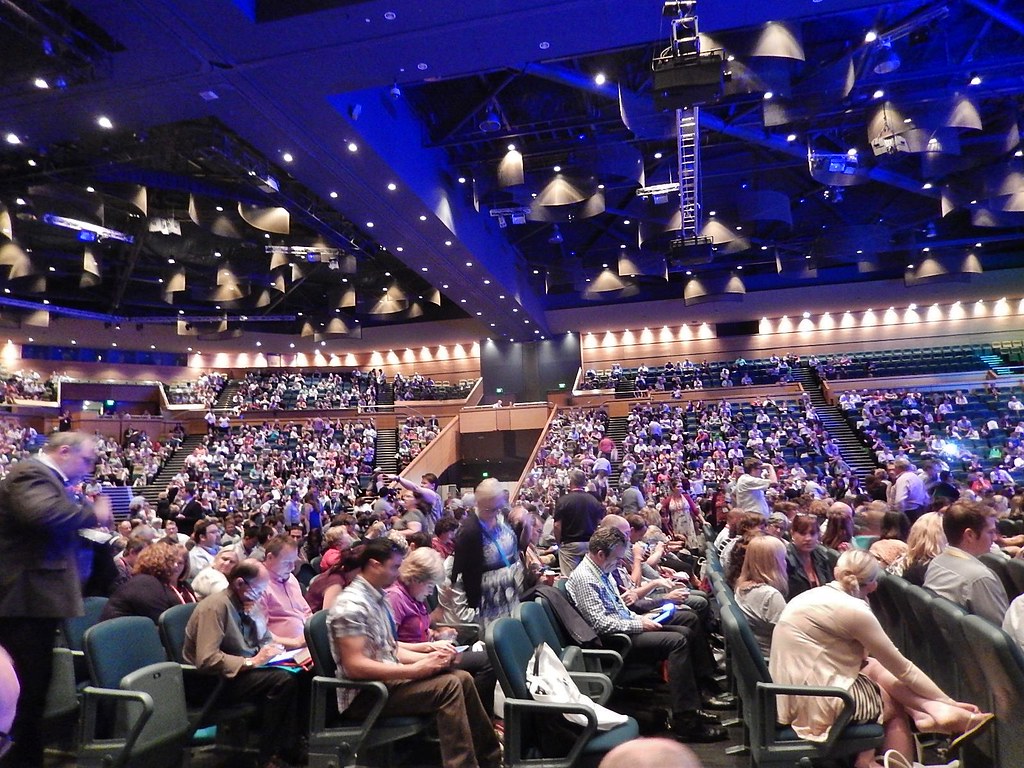 Photo: Gathered for Ken by Michael Coughlan, on Flickr

These keynotes are always the bits that first-time conference goers gravitate toward, and for good reason. It’s inspiring stuff, and if you are a regular teacher this is where you’ll get some of the best value out of your ticket.

It’s also a good place to sit in the dark and just scroll through the endless backchannel tweets on the backchannel, the ever-flowing #edutech hashtag.

So, you’ve had your fill of the main congress. Want something more tailored for your area? You could also visit the congresses of various flavours to get informed about issues specific to your domain. Are you K-12? Higher education? VET sector? University? IT admin? Library manager? Workplace trainer? There’s something for you here.

Of course, there’s the other half; the exhibition hall. There are also a lot of vendors here, and not just strictly education companies either.

Google is here of course, their booth resplendent in white, crowded-out by people watching a demo of Google Presentations, or the newly-introduced Google Classroom for Education.

Microsoft is here, with a bunch of Surface Pro 3s all in a row, inviting people to come watch their Power BI and Office 365 for Education demos.

Even the traditional big-box retailers like JB Hi-Fi were in attendance, spruiking BYOD (bring your own device)-oriented products as a service for schools.

Here are a few phrases I heard from different vendors:

Not all of these things are total contradictions, but sometimes walking around the floor, it feels like contradiction is in the air.

People will naturally preface every conversation with: “Well, the learning is the most important part of course. We just want to help by selling you *insert extremely technical thing here* — it’s essential to the learning process.”

Because I’m a device nerd, I felt this contradiction most strongly when I talked to people about devices and platforms. For example, the Google rep was very diplomatic when I asked why Samsung booth next door was all-Android, and they were all-ChromeOS. The answer: choice! We all love choice.

Ditto with the Microsoft rep on the question of iPads dominance in early education. “I gotta tell you, my 4 year old son just loves my Surface!” she said. “He plays with it all the time!”

I’m a jaded cynic, but sometimes I feel like the education market is a bit like a bratty teenage kid when it comes to tech. Prone to change, wants the impossible, quick to anger. It’s also the love-lorn teenage kid; constantly getting their hopes up (and then their heart broken) when tech doesn’t solve all their problems.

Of course, aside from all the traditional gadgetry, there’s also some really weird stuff too in the exhibition hall. Like talking mannequins…

And lots more. Oh, and at one point someone won a car? They seemed happy.

Why are we all here?

Coming to EduTECH drove me to understand more about the nature of big convention-centre style conferences. Who are they for? And purpose does something like EduTECH serve?

Well, I certainly saw inspirational talks about the fundamental nature of the state of education, and it made me think that EduTECH can be a powerful motivator for teachers. Something to keep them dreaming big and making small local changes toward educational excellence. It also helps them vent; to deal with the weight of institutional bureaucracy, or manage cultural change in their own organisations.

I saw exhibitors chatting with people on the floor, and that made me think that this is a show that’s there to make money for those vendors. Selling devices, selling apps, selling services. Selling, selling, selling. Long-term support and lucrative contracts have formed the backbone of many educational companies over the years — and their beginnings can happen from a few minutes’ chance meeting at a exhibition booth.

It’s something that educators don’t want to think too hard about, but money is a reality that keeps this whole ecosystem moving.

Don’t get me wrong either; I saw some really awesome stuff (from big companies and also indies) on the exhibition floor. Established products, and also promising beginnings that I hope can grow up to become something important.

I also saw lots of networking, and sharing. This is The Most Important Thing for everyone with an attendee badge. When the details of the lofty proclamations, the vendor promises, the blog posts, the hashtags, they all fade from memory under the weight of everyday teaching. But I tell you, as a product of these situations; those valuable relationships will still be there when it’s all over.

I wondered about this as I wandered around the exhibition hall. As I sat inside the AARNet IGLEw watching fake stars drift overhead. As I ate multiple single-serve Mentos at a Mobile Device Deployment Strategy Roundtable. How many people who truly need the confidence boost in technology get a ticket to a conference like this?

I think this is the problem that struck me most: education wants a revolution, but at places like EduTECH they’re preaching to the converted. The Australian Bureau of Statistics says:

According to the EduTECH website, almost 5000 people attended the conference in 2014. Most of them are already on board with the message that tech can enhance and improve education.

Many organisations will send their star teacher, their IT support team, or the staff with an interest in technology. In fact, almost everyone I talked to already had some background in technology. If a large revolution hits education, the lessons that emanate from a place like EduTECH need to reach staff who are currently shitscared of tech. They’re the ones that need the network, the support, and that leg up into the world.

Tickets for EduTECH were $525 for an early bird, and around $595 for a standard price. While most teachers won’t pay this themselves (it’ll most likely be a part of a professional development budget), it is still a long way from being affordable for many staff. Even though they’re already seeing thousands come through their doors, I really hope there’s some way for an event like EduTECH to reach far more people.

Bottom line for attendees: if you’re in the sphere of education, you’ll get something useful out of EduTECH.

I stayed right ’till the end of the last day. I watched vendors pack up their wares, ready for the next big show. As I was watching people disassemble their booths, I pulled my phone from my pocket and tried the ever-dodgy conference wifi one last time on my phone. Ding. Full bars. Just in time to tell me about my bus, which was leaving in 5 minutes. I bolted around the corner and jumped on it just in time.

Sometimes technology and learning do work well together after all.