I’m not the gaming guy here at Reckoner, that’s purely Raj’s domain. Why then did I ask Sennheiser to review the GSP 670 Wireless Gaming headset? I’ve been on the hunt for a nice stereo headset to use with my iPhone to make phone calls on and this bad boy looked like it would kick arse at the job – well, you’d hope so considering the RRP of $499.95!

The GSP 670 looks like the perfect fit for my needs:

Stereo headset – I don’t like hearing background noise whilst on a phone call. With a single ear piece my other ear picks up too much noise and it bothers me.

Boom mic – People not being able to hear me properly is the big reason why I hate using AirPods for phone calls (maybe the Pros are better, but I wouldn’t know as I hate in-ear headphones!). Having a boom mic puts the mic near my mouth so whoever I’m talking to can hear me perfectly.

Bluetooth – all my phone calls happen on an iPhone and they don’t have headphone sockets.

Comfortable – there’s some really lightweight shitty ones out there that are just crap to wear on long conference calls and don’t do enough to block out background noise on my end so I can hear what people are telling me.

It’s way harder than it seems to get a headset that meets all 4 requirements and I wasn’t going to drop $500 on the GSP 670 as I’m not that desperate to find a solution. So I asked Sennheiser to take the GSP 670 for a test drive instead (a perk of the job!).

Comfort – these are not light headphones and are quite bulky. Despite that I wore them for hours with no complaints. Soft ear pads, a not too tight headband and great background noise rejection thanks to the ear cups that cover my entire ear.

Connectivity – you can go wired (micro USB to USB) or wireless using either the USB dongle Sennheiser include, which is supposed to be lower latency than Bluetooth or just use Bluetooth. It also works on the PS4 if you’re a console gamer. The fancy Sennheiser app doesn’t work on the Mac but that’s ok as nobody games on a Mac. Interestingly, battery life is longer over Bluetooth than the USB dongle.

Audio quality – as I’ve said before in many other audio related reviews, I am not an audiophile and have pretty low standards for sound quality. With that considered, the GSP 670 sounds very nice and I would happily use it to listen to music as my sole pair of headphones.

Microphone quality – here’s a sample of me talking in a quiet room, recorded over Bluetooth with my Mac. Dunno if it’s “broadcast” quality like Sennheiser reckon, but you could use it for Twitch just fine I reckon, but probably not podcasting. Here’s a sample of an audio recording over USB. Doesn’t sound much different to the Bluetooth sample to my ears.

Speed of connection – when someone calls me on the iPhone, I want to be able to pick up the headphones, chuck em on my head, answer the call and talk right away. The good news is that the GSP 670 remains connected to my Bluetooth devices and I can answer the call from a button on the headset itself. The iPhone’s internal speaker even rings if the GSP 670 is connected but I’m not wearing them. Excellent.

Ease of use – when a call comes in, I don’t want to be fumbling around to answer it! Luckily the GSP 670 behaves well. It’s good at remaining connected to Bluetooth hosts even if there’s been no activity for a few hours (e.g: overnight). It’s got a cool feature where you can flip the mic boom up to mute things. Just be careful to bring it back down low enough to re-engage the mic.

Multiple simultaneous connections – The GSP 670 can also be connected to multiple devices at once. Right now I’ve got it connected to my Mac over Bluetooth listening to some music and an iPhone. If a call comes in on my iPhone it’ll stop the music, ring and I can answer using a button on the headphones. When the call is over it’ll start playing music again. Exactly how I want it to work. It would be nice if I could pair a 3rd device (my Android phone), but that’s asking too much.

Battery life – had no issues with the GSP 670 lasting for a few days with some phone calls and music listening. Plugging it in overnight every two or three days would suit my use case fine.

Gaming, great. Music, great. Phone calls, great – you won’t get a more versatile pair of cans than the GSP 670. The only thing I’d want to see Sennheiser add to the GSP 670 considering the price point is some form of noise cancellation. That would make the GSP 670 the ultimate all-rounder.

END_OF_DOCUMENT_TOKEN_TO_BE_REPLACED

Beats by Dre’s Powerbeats3 wireless earbuds are one of only a handful available today that includes Apple’s hassle-free-connection W1 chip. Out of those it’s the only one who’s design includes around the ear support, which is a godsend for those constantly battling with earbuds that never quite fit and for more active folk running or working out at the gym.

To look at the Powerbeats3 are almost identical to that of its predecessor the Powersbeats2. There are some subtle differences in colouring and shape here and there but you’d be hard pressed to notice.

Internally though, there’s little that remains the same. New twin drivers along with a vastly improved battery life going from six to twelve hours and of course the aforementioned W1 chip go a long way to seperate the Powerbeats3 from their past.

END_OF_DOCUMENT_TOKEN_TO_BE_REPLACED

You’d be forgiven for not associating the Logitech brand with gaming. A long time peripheral maker the company has a rich history of creating some of the best third party devices on the market. From keyboards to mice to universal remotes, Logitech have a great understanding of almost every aspect of our now daily interactions with technology.

It seems only natural that Logitech would take that knowledge and expertise and apply it to a new high-end range of devices made specifically for the gaming community. And they’re not messing about either. Feature-rich and aggressively priced the “Logitech G” series of peripherals are sure to impressive the most stalwart of PC gamers. END_OF_DOCUMENT_TOKEN_TO_BE_REPLACED

Winter in Sydney is running season, where unfit fools start pounding the pavement in the hope that this year – if they try hard enough – they might just be able to complete the City to Surf. I am one such fool. Helping me along this year are two pairs of sporty headphones, the Plantronics BackBeat GO 2, and the Klipsch A5i  headphones. END_OF_DOCUMENT_TOKEN_TO_BE_REPLACED 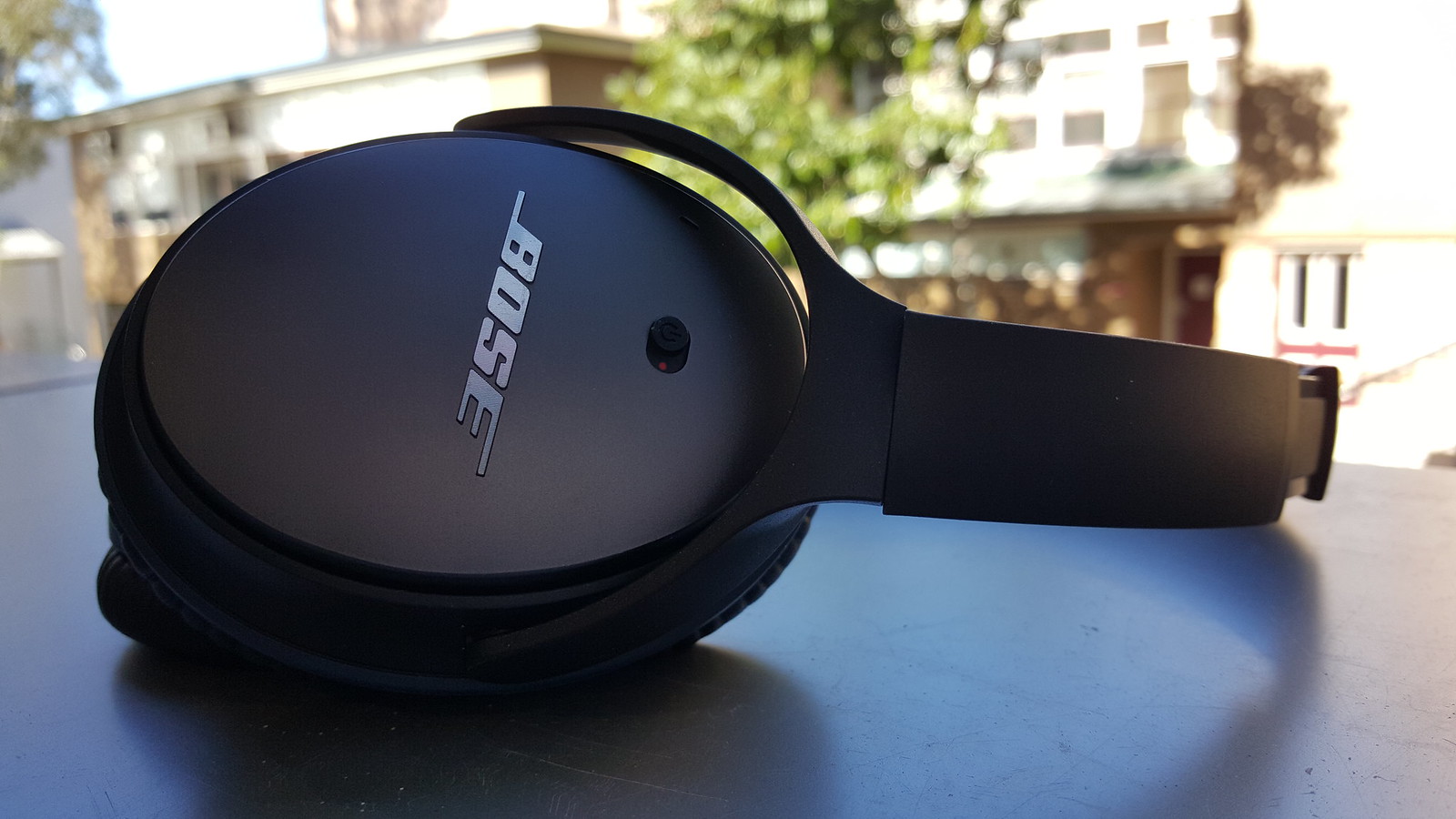 A few months ago I was in the office of a PR Company, dropping off a bunch of review units that I never got around to reviewing. The products I was dropping off were ok, but not good enough to bother writing about publicly. Instead, I shared my thoughts with the company privately, over a beer. As I was leaving, one of the lovely people there asked if I wanted to borrow a pair of Bose QuietComfort 25s. “Nah, I already have a bunch of headphones to review at home, I can’t add more to the pile of shame!” “Are you sure? They’re pretty good. I think you’ll like them…”

I said thanks but no thanks, and was on my way. END_OF_DOCUMENT_TOKEN_TO_BE_REPLACED

a-Jays Five are the latest in-ear headphones in the Jays line up. a-Jays have long been a popular choice amongst iPhone users, and with the Five, Jays are sharing the love to our Android and Windows Phone friends.

END_OF_DOCUMENT_TOKEN_TO_BE_REPLACED

Not into ads? Neither are we.
Join our Patreon and get rid of them!
Already a patron? Log in now to hide them.

You’re Reckoner’s life blood and we can’t do it without you. And for helping out we’re going to give you some awesome treats!