By Peter Wells
In Reviews
on January 7, 20145 min read
ShareTweetShareSubmit

The Samsung Galaxy S4 Mini fascinated me from the moment I met it. As tacky as it is, I was immediately charmed by faux-wooden box it came in. The phone ships with decent in-ear headphones, and the shiny plastic shell felt great in the hand.

At the same time, the home button was stiff and looked easily-breakable, the back case a little too hollow, and the device was covered in weird sticky plastic film that took days for me to pick at and peel off.

And so began my experience with the Samsung Galaxy S4 mini, loving and hating it every second of it.

Despite the early teething problems, I really loved the feel of this handset. The rounded plastic shell is light but not slippery in the hand. It feels like a newer, more polished version of the iPhone circa 3G/3GS.

After a week or so, the home button finally loosened up, and it felt great to play with. The in-ear headphones were surprisingly decent, with volume rocker and play/pause switch — a rarity in Android phones.

The screen was beautiful and bright, and while not-quite-retina, it is still crisp enough — pixels are only noticeable on the very smallest and thinnest fonts. The Mini supports 4G — so you’re not giving up speed for size here.

Most importantly for this review, the S4 Mini feels mini! The screen is still 4.3 inches, same as the HTC One mini, but it just feels smaller. I don’t really know why, the device is bigger boned than the HTC, but there you are. In fact, this would be the best mini phone so far if the software matched the hardware…

The camera sucks. You can use it to take snapshots of receipts for your accountant, maybe, but you’re never going to capture memories with this thing.

When people talk about bloat-ware and “heavy interfaces” on Android, they’re generally talking about Samsung’s Touchwiz. Touchwiz over Jellybean is akin to the restoration of Ecce Homo. A noble effort, but by no means an improvement.

To be fair though, at least they’re slowly getting better. Touchwiz on my first Samsung (Galaxy S2) was truly hideous, whereas here on the S4 mini, it’s just mildly unpleasant.

The Mail app is no longer dark themed by default, adding welcomed readability to email. The default Calendar has a look that’d make Scott Forstall proud, or litigious. Even the browser and keyboard are ok these days. It’s all competent, but better still, most of it is avoidable.

Being Android, most apps and even the keyboard are replaceable by Google’s own apps: Hangouts, Calendar, Chrome etc. The awful clock widget can and should be swapped for Timely (now a Google product and free).

Samsung even encourage you to swap launchers by making their awful dock of awful apps uneditable – a special treat for Australian customers. So take them up on the offer and use something like Nova Launcher for a more Stock Android experience, or experiment with Aviate or Themer for an overall new look. Within minutes you can banish the Touchwiz look to just the settings and notifications bar.

To be fair to Samsung, I tend to tweak most Android phones, as I did with the Sony Xperia Mini and the HTC One mini before this.

For most phones, tweaks are just for the fun of tinkering. With a Samsung device, it’s mandatory.

It’s a curious thing that Samsung remains the world’s most popular Android maker while making the world’s worst version of Android. Touchwiz is the Kyle and Jackie O of Android skins.

I know I’ve laboured the point about crappy software, but sadly, I’m not done yet.

I could live with blue and green (should never be seen) menus and settings. I could live with the hideous dialer and mostly avoidable apps. But I couldn’t handle the constant software freak outs, reboots and crashes on the device.

Daily, the phone would randomly freak out – there’s no other way of describing it.

Suddenly the phone would bounce around, launching and quitting apps, the notification bar would slide up and down, voice commands would come on and off for no reason. Shit would be flying everywhere, like a scene from the Amityville Horror.

As a lapsed Catholic, I assumed this was my fault. I wiped the phone and removed all interface tweaks, but the phone still freaked out daily. For a while I was convinced it was the digitiser, and thoroughly cleaning the device was the answer (Catholic). Still, the phone was possessed.

Here’s where I thought the review would end, but despite all the reboots and freak outs, I’d become quite attached to the little guy, and wanted to make our relationship work.

Then I saw there was a stable release of Cyanogen Mod available for the S4 mini. 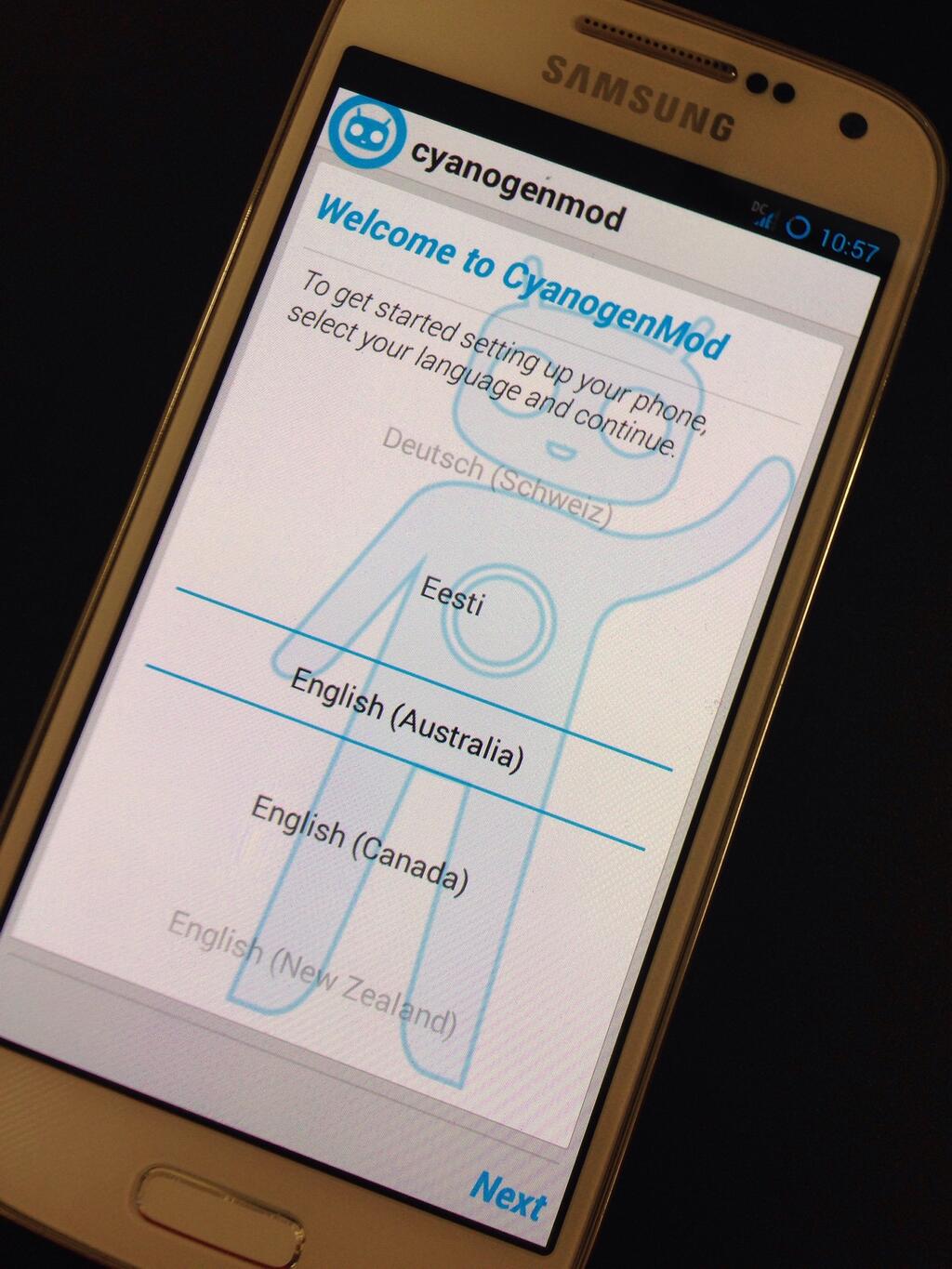 For those unfamiliar, Cyanogen Mod is a fast, lightweight version of Android that is very close to stock.

It can be quite tricky to install, and it voids your warranty, but what the hell? YOLO and all that.

Cyanogen Mod is available as a Stable Release for 4.3 (Jellybean), or a less stable Nightly for 4.4 (KitKat). I chose the stable version, and was glad to see the tasteful settings and notifications of stock android, the clean dialer and smoother animations all round.

Better still, the phone was so much more reliable. The phone never rebooted for fun under CM, and freak outs have stopped. I even spent a week with the Nightly KitKat Builds, and they were fine too. KitKat is super light and fast on the S4 mini, even better than the Jellybean version – though at time of writing Google Hangouts is a wee bit borked.

Out of the box, the S4 mini looks great, but it disappoints with completely unstable software. It’s incredible Samsung have let the phone ship in this state. I kept thinking I must have a dud handset, surely it can’t be that bad – but if so, why did Cyanogen Mod fix the phone’s many bugs?

Installing Cyanogen Mod is not for everyone – it’s easy to mess up, it theoretically makes your phone an easier target for hackers, and it will void your warranty. It also should not be something you need to do to turn a $420 phone into a usable device.

The difference here is insane.

The HTC One mini is a much better device in every way: faster, smoother, more reliable, better design, much better camera. If you’re looking for a smaller Android device, it’s still the one to beat. But the S4 mini just kept me coming back to tinker and play, and Cyanogen Mod made it feel like a Nexus mini.

The S4 mini is only for hardcore geeks – a stopgap until we see a real, official Nexus mini.

Shit, can we get a Nexus mini? That would be awesome.